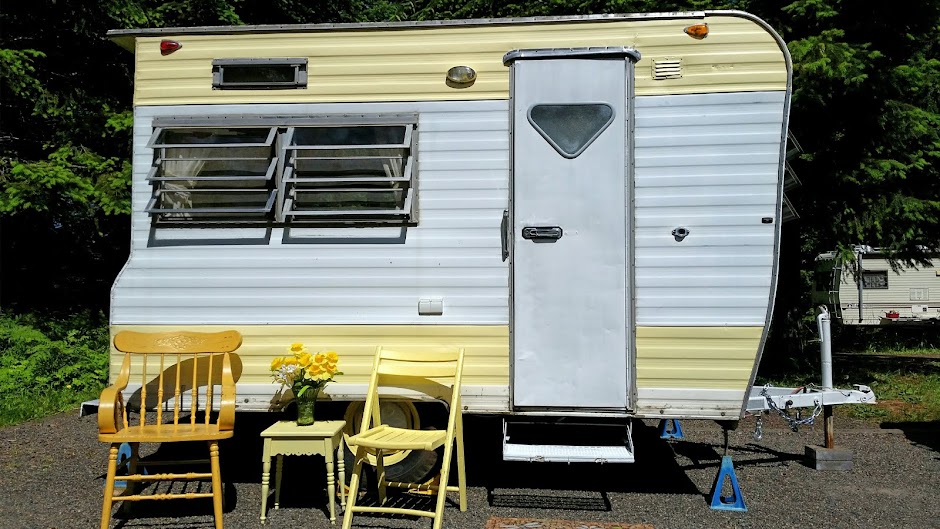 Things That Are Seen


I recently shared changes that won’t been seen when Daffodil is finished – now it’s time to start showing you what’s happened as we started to put her back together.  It’s getting exciting and things are happening very fast.  The changes that are happening now are things that can be seen.  My sweetheart is spending many long hours to work his magic and put her back together again.  I think you’re going to be amazed to see how much has changed since you last visited Daffodil.

The next thing to do in the restoration process was the ceiling.  My sweetheart installed the paneling.  The light coming through the front window opening made it hard to get good photos.  This is taken from the front toward the back. 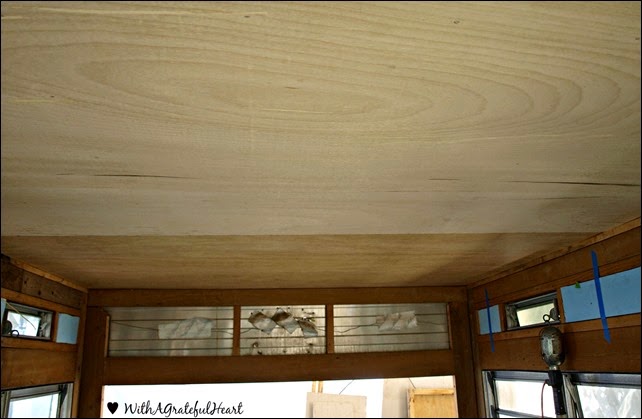 Looking toward the front, it looked like this.  I love the curve on the front corners. 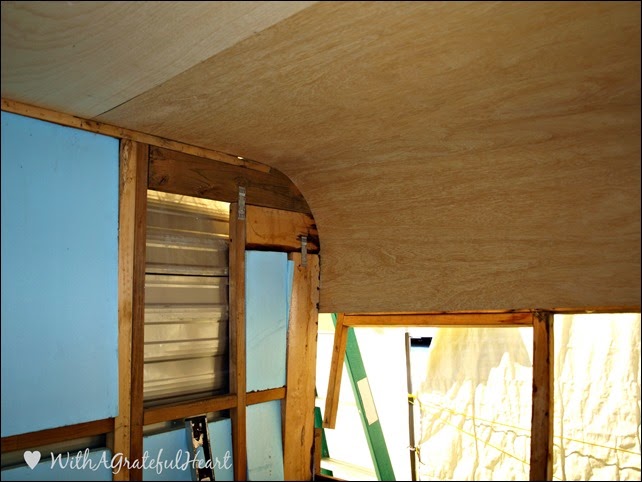 After the paneling was up, my sweetheart cut out the openings for the front window and the ceiling vent.  He calls it my skylight! 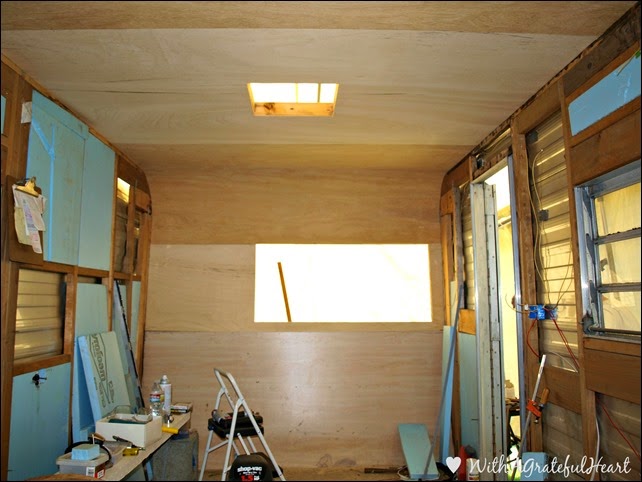 When the ceiling was completely installed, it was time to paint.  We decided to paint the ceiling and front wall with a soft, creamy, off-white paint.  Have you ever tried to choose white paint?  There are a million shades of white! 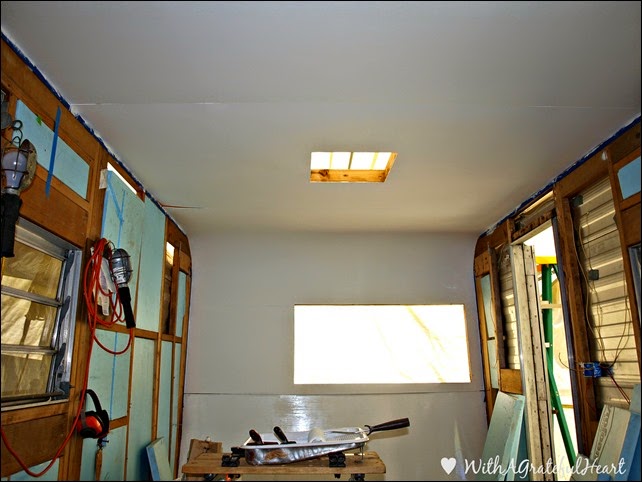 Next came the wall paneling.  This was a tedious job, at times, but my sweetheart worked hard to get it just right.  I chose oak paneling for the top part of the walls. . . 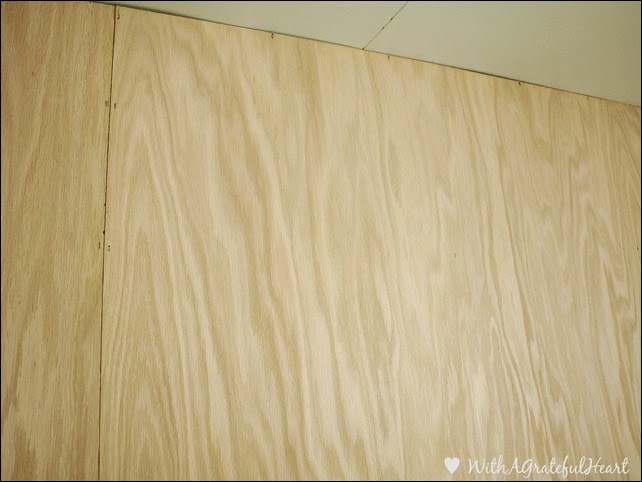 And oak bead board on the lower part of the walls. 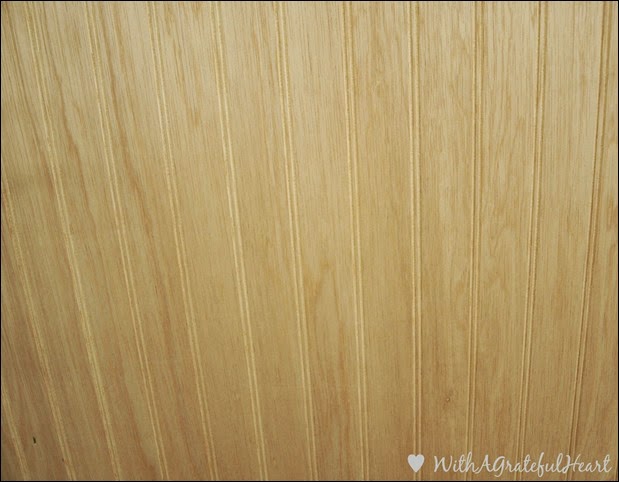 I loved the way it looked when it all up on the walls.  Chair rail trim will be added between the paneling and the bead board after all of the cabinets and the closet are in.  Seams in the paneling and corners will have wood trim added, too. 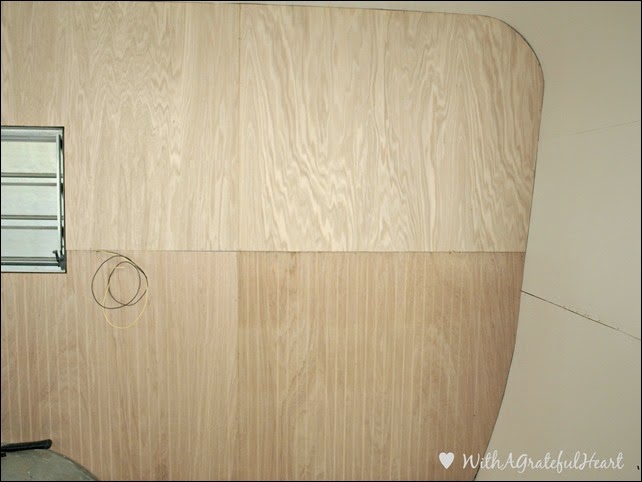 Then it was time to add a finish to the wall paneling.  I envisioned whitewashed paneling that would allow some of the wood grain to show through.  We thinned the off-white paint we used on the ceiling and it was just perfect.  That worked great – it was just what I wanted.  The upper paneling is beautiful. . . 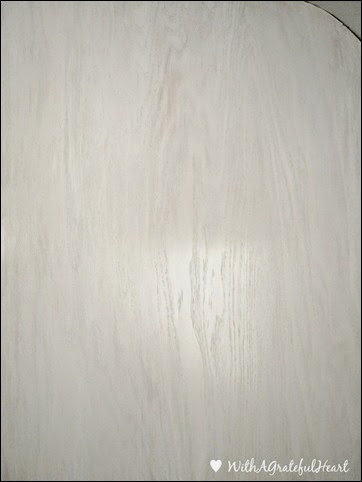 And I love the way the bead board looks with its new finish. 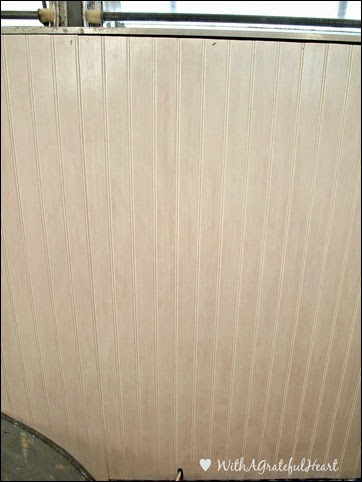 The photos look like I’ve added pink.  It’s not pink – it’s the way the light is shining on the walls where the grain is showing through the finish. 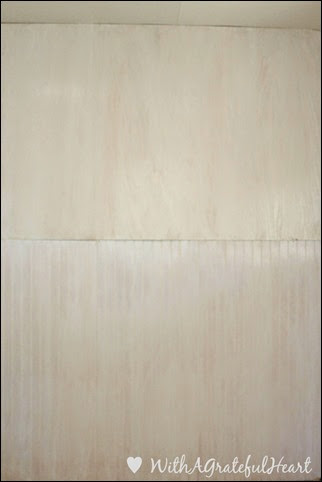 My sweetheart’s brother used to have a flooring and counter top business.  He is doing general construction these days but he still installs a lot of flooring.  After the walls were finished he came and installed Daffodil’s new flooring.  It’s a beautiful hardwood-look vinyl. 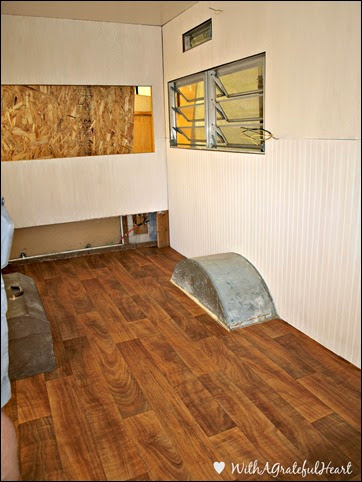 I love this flooring – and it was free!  Last year my sweetheart’s brother hired him to help install this vinyl flooring throughout a home at the beach.  My sweetheart brought a small sample home to show me what they were doing.  I loved the sample and asked if he would find out where I could buy this same vinyl for Daffodil.  They went back the next week to finish the job and when he returned after their final day at the coast he brought a small roll of flooring that was left from the job they had just completed.  The homeowner didn’t want the scrap piece and it would have been dumpster bound so my brother-in-law sent it home for me to use in Daffodil.  I couldn’t be more pleased now that it’s in place – and free makes it even better!

Joey decided he should inspect the job.  He approved, but I think it may have been the attention he got that helped him decide. 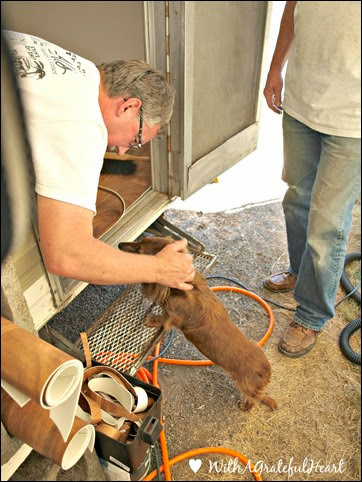 Work continues and there will be more to share very soon.  There is a reason we are working so many long hours – there’s a deadline to meet.  I’ll tell you all about it when we come by to visit again.
Posted by Adrienne at 10:58 PM 9 comments:

Recently I showed you where Daffodil spent the winter.  She was safe and secure and dry.  That was important because you may recall that her roof and some of her siding was off and two of her windows had been taken out.  We had planned to work on her through the winter but life brought some changes that put those plans on hold.   It was Springtime before we could start working on her restoration again.  Let’s go inside her winter shelter and see what’s going on.  My sweetheart has removed the tarps that covered the open roof and windows.  He has her opened up and he's working inside.  It looks like he has headphones on so he can listen to music.  No music today - he's been using loud power tools so he has his protective ear 'gear' on. 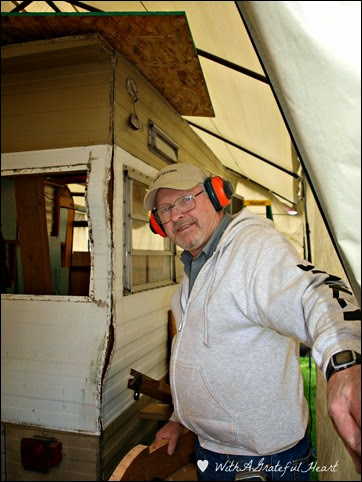 Come inside for awhile – we can stand back and watch him work.  Watch your step – his ‘workbench’ takes a bit of space.  He has carefully laid out things he needs to use during the restoration project. 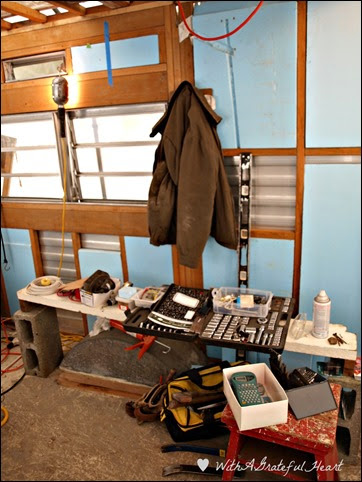 Today he’s beginning to stabilize Daffodil’s structure – her underpinnings.  When we removed all of the interior paneling we discovered the cause of a problem we had noticed on her exterior siding (called sheeting).  The sheeting had split diagonally at both back corners and the split had been filled with caulking. 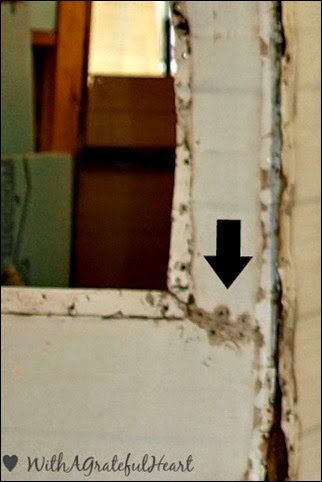 We didn’t know what had caused the split and we were concerned that it could happen again if we didn’t figure it out.  The moment I removed the interior paneling off the back wall my sweetheart knew what had happened – and he knew what to do to keep it from happening again!  The trailer was built using very thin boards on the back corners.  They weren’t sturdy enough to keep the trailer from twisting a bit as she went down the road.  She must have done a lot of twisting and shifting when her previous owner drove over dirt roads filled with potholes when he took her hunting high in the mountains of Oregon.  The twisting and shifting back and forth made the sheeting tear from the corners of the back window to the outside corner of the trailer.  My sweetheart checked up front and he decided that needed to be more stable, too. 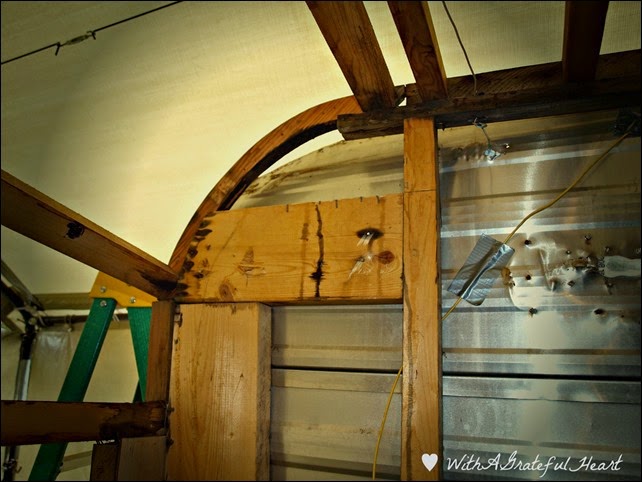 It would take a lot of careful, tedious work but it had to be done.  No one would ever see all the work he was doing, but these unseen changes would make a big difference!  To start, he had to remove some pieces to make way for the stabilizing parts. 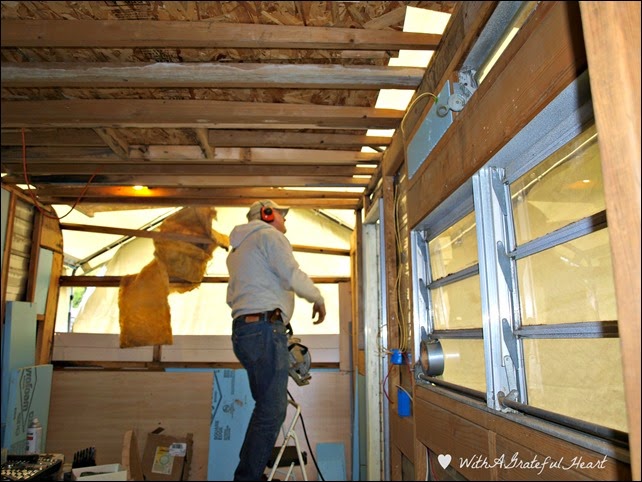 I have to detour a bit here because I see something I think you should see.  Look in the far end of the side window on the right of the photo above.  There’s a roll of duct tape!  My sweetheart got tired of picking it up off the floor, or searching for it, so he found a place where it would stay until he needed it again.  It doesn't move from there - he can always find it.  It’s quite a clever idea, don’t you think? 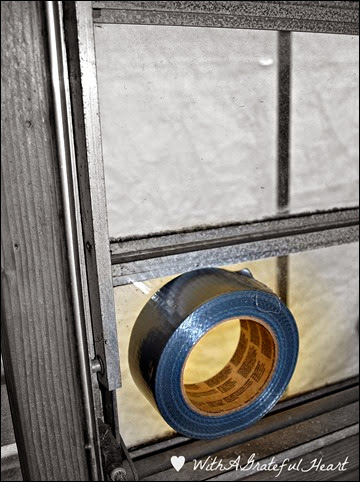 Now, back to work!  First, he had to measure very carefully.  This old tool – a square – belonged to his father.  Imagine the stories it could tell! 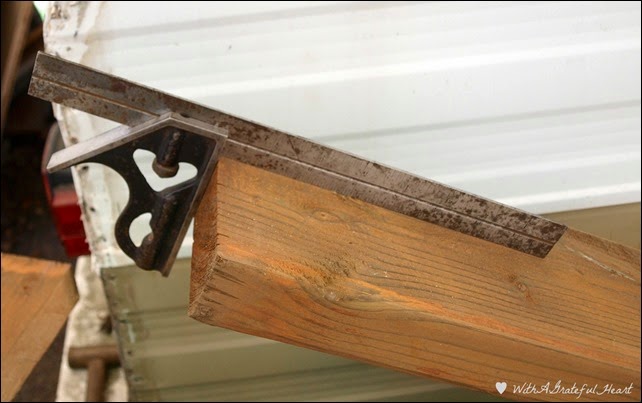 My sweetheart's work is precise – done right.  To perfection!  He’s very particular about things.  Maybe that’s because he doesn’t want to take them apart and do them over again! 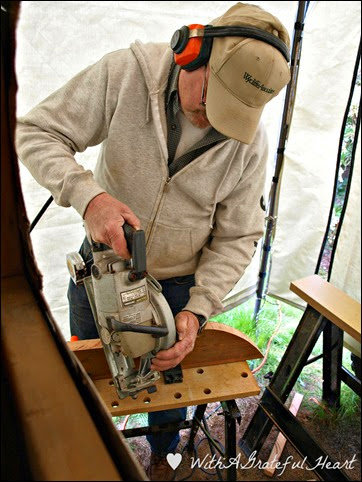 Two of the new pieces for the front corners seemed very complicated to me but it wasn’t long and he had them shaped and formed to fit perfectly. 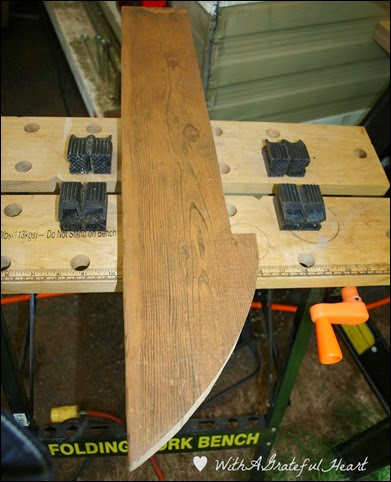 He carefully put the new pieces in place. . . 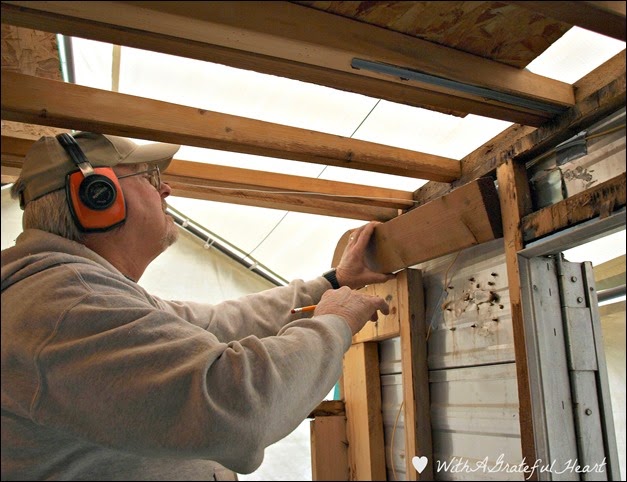 And then secured them so they would stay exactly where they need to be. 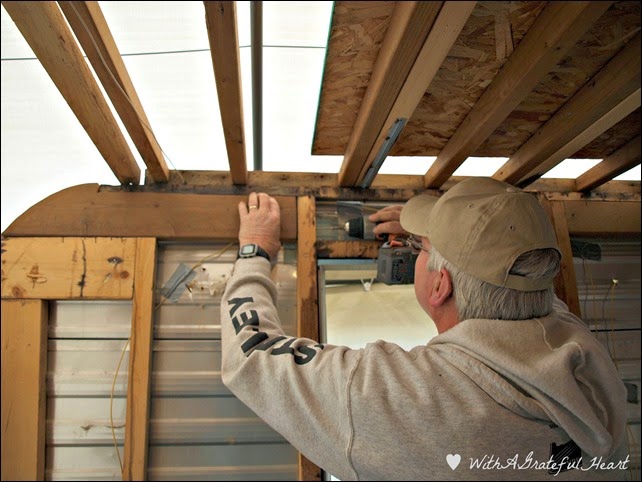 When the front corners were stabilized, he moved to the back.  Stabilizing the back corners involved more than just adding more wood – it involved a major change that was the subject of much discussion.  My sweetheart had removed the back window when the restoration first began.  When it was removed we planned to put it right back in place when he was finished.  With the changes needed on both back corners we would ‘lose’ a few inches of window space because of the addition of wider boards.  There was no way around it – the old window wouldn’t fit.  We would have to decide what to do about that.  While we talked about it, thought it over and looked at our options he continued working on the back corners.  Then, one day the structural work was finished.  We felt like we had come to a major milestone – a turning point, you might say!  Now we could start putting her back together again.  I'm pretty sure I must have clapped my hands and jumped for joy as I stood outside of Daffodil’s back window opening and looked through toward her front window.  My sweetheart’s hard work had paid off.  Now we could start making this sweet trailer a thing of beauty.  What we had dreamed of for so long could begin to become reality. 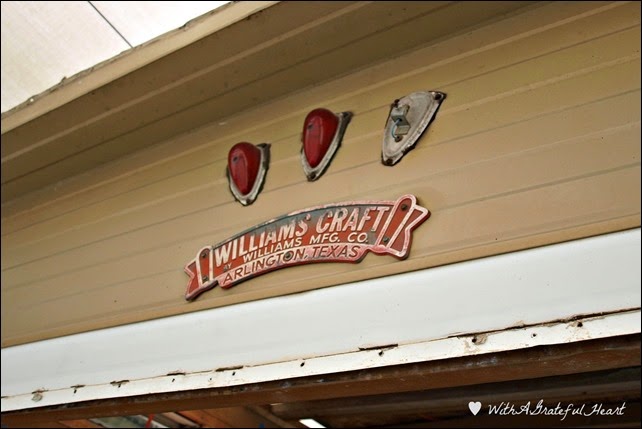 Things have changed since I took these photos.  A new window has been ordered, broken panes in the front window have been replaced and some things are beginning to come together inside.  I will share more very soon.  It’s getting exciting and I can’t wait to show you what we're working on now!
Posted by Adrienne at 5:37 PM 3 comments: